CHIEFS FALL TO LIONS HAMMER IN FINAL ALL BLACKS WARM-UP

Last Tuesday saw Chiefs fall to the hammer of the British and Irish Lions squad in Hamilton as they continue the preparations for their upcoming first Test on Saturday against New Zealand. 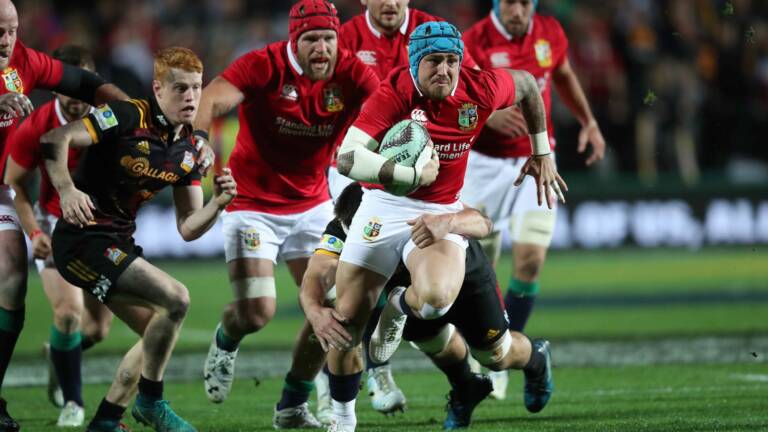 The game saw Jack Nowell land in two tries as the Lions snatched up a convincing victory over the Chiefs.

The England wing crossed in either half as Warren Gatland’s midweek side enjoyed a 28-point victory on Tuesday.

A boot from Dan Biggar was equally on hand to add the required gloss to a morale boosting performance.

In reply, Stephen Donald kicked two penalties for the Chiefs with one coming at a time when Joe Marler, Lions prop was in the sin-bin.

The Lions were awarded penalty tries against the Chiefs as well as against Maori All Blacks. With Jack Nowell’s try double, he now becomes the 2017 tour’s joint-top try scorer.

In their attack style, the Lions showed off a more threatening advance especially after their midweek defeats by the Blues and the Highlanders.

The likes of Williams, Elliot Daly and Nowell were on ground, finding space to push further attacks and score.

Playing at full back, the versatile Williams was the one who started the move that saw Nowelldive over for his first try after fly-halfBiggar was stopped just short.

Also, Payne was able to sprint over thus completing the rout after Williams pushed in a snaking run and offload.

The Lion’s squad has now turned their attention to the first Test holding on Saturday at Eden Park which would see them go head-on against the All Blacks. The game would kick off at 08:35 BST.